About a month ago one of my white belt students asked me if he could bring ankle weights with him to class.  I asked him why; he said that he wanted to improve his kicks and would practice with them before/after a session.

A quick internet search shows loads of martial artists advocating this type of training method.  The rationale behind it is by making a skill harder in practice, it makes it easier in competition.  The problem with that though, is that just because something is harder doesn’t mean it’s better.  I believe that the use of ankle weights shows a clear misunderstanding of how force is produced, and ignores things like movement patterns and velocity of movement.  Let’s take the side kick for example… 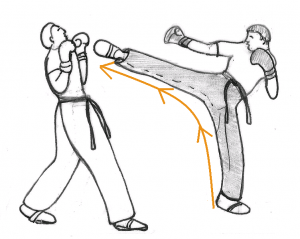 To perform a side kick, the martial artist pushes off the ground and flexes the knee, which is then followed by a fast hip and knee extension to deliver the kick into the opponent. Sidekicks are performed unilaterally, from a side facing posture with force being propelled in a horizontal manner. The key points here are that force is propelled HORIZONTALLY through extension.

In order to generate more force, any load that is applied needs to therefore act against this movement pattern. Ankle weights apply a downward force at the ankle.

So, unless you want to improve a static leg hold, you are simply applying the resistance in the wrong direction and at the wrong location.

Whenever we are considering incorporating supplementary exercises to our martial arts practice it’s useful to reflect on Verkhoshansky’s concept of dynamic correspondence.  This concept emphasizes that all exercises for specific sports be chosen to enhance the required sport motor qualities/movement patterns in terms of several criterions which include:

Wearing ankle weights will apply force in the wrong direction, strengthen the wrong muscles and are likely to ensure you practice the wrong movement patterns.

So how about using elastic resistance bands?

Now that’s another post… there may be some merit in this protocol, but firstly consider the above bullet points, and also things like where the band is being fixed, what tension is being applied, and of course what you are trying to achieve, e.g. improvement in velocity or impact force.  All this data together will then determine the exercises usefulness …